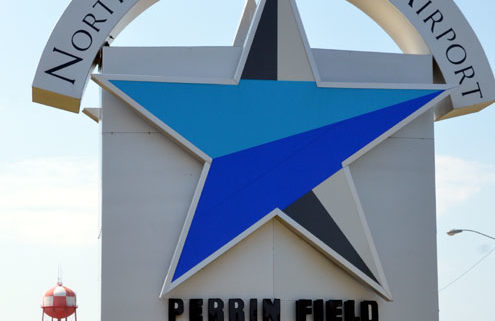 In the 1960s North Texas Regional Airport – Perrin Field’s alert hangar was constantly ready to respond to threats against the U.S. With its four large bay doors that were designed for quick release and interceptor aircraft, the hangar provided a quick military response in the event of an emergency along the country’s southern border.

While the golden days of Perrin Field’s military past may be a distant memory, the alert hangar may soon see new life.

Officials with the Grayson County Regional Mobility Authority voted unanimously Thursday to authorize contract negotiations with A4L LLC for the lease of half of the alert hangar. Previously, A4L has leased out aircraft including the titular Douglas A4 Skyhawk for government and commercial contracts.

“The plan for A4L is to continue and expand to those operations and conduct maintenance on King Air Leer Jets and other turbine-powered aircraft,” Jim Wimberly, representing Texas Aviation Partners, said.

The lease would include nearly 29,000 square feet of hangar, office and shop space along the northern side of the hangar. Under preliminary agreements, the hangar will be used to store, maintain and refurbish aircraft. On its website, A4L lists services including contract flights, film and stunt photography, and airshows.

Negotiations will be handled by Texas Aviation Partners, who provide marketing and operational services to NTRA. Stephen Alexander, a partner with TAP, said A4L previously sub-rented a smaller box hangar at NTRA, thus making it one of the first businesses to expand at NTRA since TAP was contracted for services earlier this year.

Alexander said the alert hangar has had several small tenants over the years, but not to the size of A4L. Over the past few years, Alexander said the building has been vacant. Issues with renting the hangar included its remote location, size and age, he said.

“Everyone considers this a hard rent,” he said.

Alexander said he and other officials hope that the large space would give the company room to grow and, with time, expand into the full building space. Additionally, he said by adding another tenant to the space, he hopes that it will generate additional interest in the airport.

When asked about any upgrades to the site, Board Chairman Clyde Siebman said the RMA will pay to put up a partition wall separating the building in half for the lease. Any other upgrades and improvements to the site would be at the expense of the lessee, he said.

Siebman said it is too soon to announce the details of any agreement, but said a draft will likely be presented to the board in January.