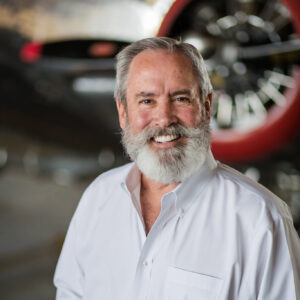 Jim has over 4 decades of executive leadership experience in the aviation industry. After graduating from the University of Texas-Permian Basin in 1975 with a BBA in Aviation Management, Jim worked as a supervisor at Madison-Cooper Airport in Waco, Texas. In 1977, he joined the City of Houston’s Aviation Department and rose to the position of Airport Manager at William P. Hobby Airport in 1980. When Houston acquired Ellington Air Force Base as a general aviation reliever airport in 1982, Jim’s responsibilities were expanded to include management of both airports.

In 1985, Jim was named Vice President of Ground Operations and Emergency Director for Southwest Airlines in Dallas, Texas. In 1991, the Board of Directors for Southwest appointed Jim to the Executive Planning Committee, elevating him to Executive Officer, and in 1998, he was promoted to Executive Vice President. In 1999, Jim was named Chief Operating Officer and for the next 6 years he directed airport security, charters, environmental affairs, flight operations, fuel administration, ground operations, maintenance and engineering, properties and facilities, and safety. Jim served on the Air Transport Association’s Senior Advisory Committee and was a member of the FAA Air Traffic Management Steering Group. Currently, Jim serves on the Board of Directors for Ronald McDonald House Charities of Austin and the Greater San Marcos Partnership  Board of Directors.